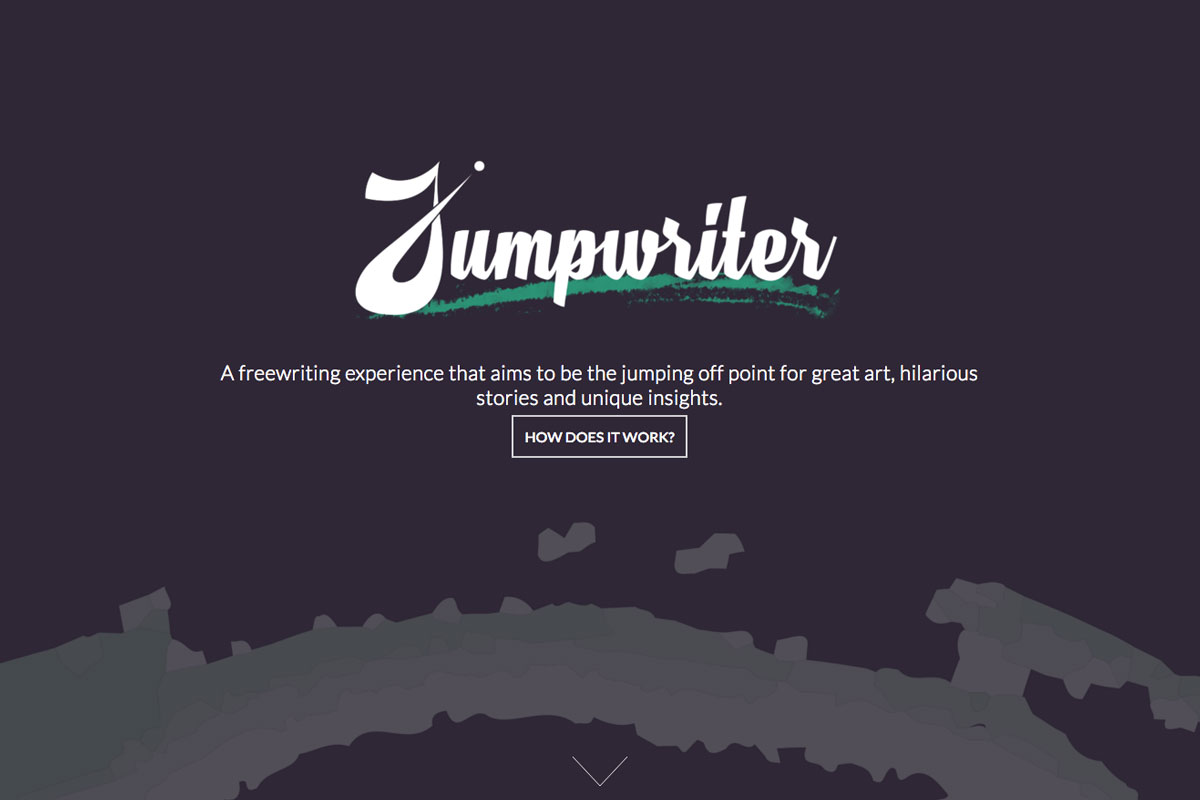 It’s been a long time coming, but my creative writing tool, JumpWriter (formerly known as JumpOff) is live on the web as a Meteor App. Check it out at JumpWriter.com.

I’ve written more thoroughly about the full story of JumpWriter on my web-dev blog, so I won’t rehash it all here. But this free-writing tool has been a passion project of mine for a long time, and it’s finally up and running for anyone to use. Please give it a shot, pass it along, and if you have any feedback I’d love to hear it! Email me at jesse@jessequinnlee.com. Thanks!

After experimenting with Rails for building web apps, I’ve decided to learn to build apps using the MEAN.js stack. Very quickly, the MEAN stack is comprised of:

So the MEAN stack allows you to write web apps completely using Javascript (as well as html/css of course). Apart from these 4 basic technologies, MeanJS integrates packages like Bower and Grunt.

I like the elegance of Ruby and Rails, but seeing as how apps seem to be moving toward using javascript heavily for front-end frameworks, I’d rather learn to code on the backend using Node and Javascript so I don’t have to switch contexts between Ruby and Javascript. Also, the non-blocking async nature of Node means that it has the potential to be very fast. Node’s got a lot of hype around it and seems to be growing quickly, so if I’m gonna invest my time in learning a technology, it seems like a good one.

I’ve already noticed that launching/tweaking a MEANjs app is more complicated than a Rails app, and there is less support out there, learning resources aren’t as prevalent or polished, although I’ve found a few good ones. Here’s what I’m using so far, apart from the official Framework docs, constant Googling and StackOverflow:

I’m using Heroku for cloud hosting, and MongoLabs for my online database. Heroku seems to offer pretty good support for Node apps, though admittedly I don’t really have anything to compare it to.

As far as the actual purpose of the app I’m building, I’ll write more on that in a different post as I progress, but I’ve already got a working test app up on Heroku and linked to the .io domain I purchased for it. It’s coming along!

I’m on chapter 8 of The Ruby on Rails Tutorial now. Here’s the app so far, hosted with Heroku:

Fairly boring looking, but soon I’ll be done with the tutorial, at which point I’ll start building my own app, which will be much more exciting.

So while I’m working through The Rails Tutorial I’ll be creating their demo project, but I’ll also be working on my first rails app, which is going to be a writing prompt generator. The interface will be fairly simple, it’ll probably look something like this quick PHP app I wrote for fun (screenshot below).

But the prompt generator will be pulling words from The Princeton Lexical Database to generate random phrases. Upon generation, a timed text input field will pop up. The user will be able to write in the text input field, and the contents will be saved to their user profile, along with the prompt phrase used. There’ll be an option for skipping to a new prompt, or flagging prompts they want to reference again.

One of the most interesting parts of the project will be figuring out an algorithm that will generate some sort of phrase for people to work with. I’ll be posting progress periodically here.

I finally have a desk (read: two adjustable shelves which I sawed down to the optimal height and a 2’x4′ piece of plywood laid across them), and I’m ready to get back to learning Ruby on Rails. I’m working my way through railstutorial.org and it feels great to be back at it after the move. I’ll be posting links to the project, which’ll be hosted on Github. It’s a pretty comprehensive tutorial, breaking off into tangential tutorials for supplementary subjects like git, Sublime Text 2 (the best free text editor I’ve come across), test driven development with RSpec, and more.

More on this to come.